Pessac-Léognan is a fabulous wine growing region directly south of the city of Bordeaux. It has equally strong red and white wines, which makes it a rare treat in the red-rich regions of Bordeaux. One vineyard that we are excited to visit on future trips to this region is the Domaine de Grandmaison.

From time to time over the course of the past few centuries, the production of wine sometimes broke off (due to frost or some other conditions), and the land was used for mixed farming. There were even times when Grandmaison was utilized as country house.

In the beginning of the 20th century, François Bouquier, who had to leave his native Cantal, had the opportunity to occasionally harvest the grapes at Grandmaison and eventually acquired the property in 1939, when he discovered that it was for sale.

Then, in 1970, Jean (his son) and his wife Françoise revitalized the vineyard and began the construction of the current winery. From that point on, Grandmaison entered again into production. Since 1988, it is François, their son, who makes the wine and with his wife, Mayi, both of whom have been dedicated to the family property since 1993.

The Grandmaison red varietals consist of 60% Merlot, 30% Cabernet Sauvignon and 10% Cabernet Franc, all planted on 16 hectares of land and harvested by hand. The harvest date is carefully defined to ensure the best the quality of grapes.

The harvested grape clusters are sorted before and after they pass through the érafloir and are transported smoothly in tanks, by means of a rising belt. Through the activity of yeasts, carefully chosen in collaboration with an enologist, the alcoholic fermentation starts immediately, thus protecting the aromatic potential of the wines.

The wine making can then begin and will last approximately six weeks. 80% of the harvest is raised in oak barrels for 12 months (renewed by thirds every year). After the assembly and bonding, the bottling takes place in Grandmaison’s cellars. 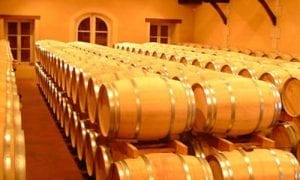 The Grandmaison white varietals consist of 65% Sauvignon, 15% Sauvignon Grey and 20% Sémillon, all planted on 3 hectares of land and also harvested by hand. As with the red grapes, careful observation is done in the vineyard to set the beginning of the grape harvest.

The clusters are then placed into the press, which is run at low pressure to allow an optimal condition for the release of the juice. The next day, the juice is clarified cold and filtered.

30% of the harvest is raised in new barrels for five months and 70% in tanks. Finally, in the spring of the following year, after assembly and bonding, the bottling takes place in Grandmaison’s cellars.