Those looking for soft lounge chairs, elevator music and chic atmosphere – look elsewhere. The authentic Basque tradition of cider-making is something else entirely: A warm, friendly culinary experience focusing on exceptional local products in a charming, rustic environment.

The History of the Basque Cider House Tradition

The historical roots of this tradition go back to the town of Astigarraga, near San Sebastián. There are many cider houses spread throughout Basque Country, but it is in the province of Gipuzkoa that the tradition of the producers of this cider has always remained lively, even when in the 60s the consumption of cider had almost entirely ceased.

Cider makers in 16th century Basque Country would make their living on the production and distribution of cider to local traders. Today, these same sagardotegi (cider houses) offer regular fixed menus along with the opportunity to sample the cider. How did this custom arise?

At the beginning of the last century, the traders who came to enjoy and to choose cider brought a meal along with them, so as best to appreciate the cider. But, the cider houses often had plenty of food on hand: some dried cod stored in attics with apples, oxen, ewes, and hens, walnuts and greens from the garden. After a while, the cider producers had the idea to offer a menu stemming from all the products on the farm, during the cider season (from mid-January to mid-April, when the fermentation of last year’s harvest is finished).

Pretty much the same menu is found in all the cider houses today: a cod omelet, then diced fried cod, followed by txuleta (steak) cooked over a wood fire, and finally sheep’s milk cheese with quince jelly and walnuts. This form of rustic catering – allowing traders to take their time and enjoy the cider alone with a farmhouse meal in a warm, cosy setting – ended up appealing to many, so the tradition continued down to the present. 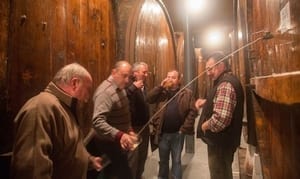 All those familiar with Basque cider know this welcome announcement, shouted by the Sagardoegile (the producer of the cider), which signals the time has come to taste the cider straight from the immense barrels of the wine storehouse. A tap is placed about head-height in the barrel using a txotx (small sharp piece of wood), which when opened causes a spring of cider (Sagardo) to pour from the barrel. When “txotx” is called, everyone desiring cider brings her glass to the barrel and tilts it near the ground moving gradually back up to the source. This movement allows for an optimal oxygenation of the cider, the release of Txinparta, a naturally present carbon dioxide in the cider, and improves the aroma.

The beauty of this tradition is in the multiple tastings, because the cider has a slightly different taste in every kupela. Thus, it is better to enjoy several small txotx (just enough to fill the bottom of the glass) throughout the course of a cider house meal.  Txotx!