The first record of red wines from Montalcino dates back to the early 14th century, but the all-Sangiovese Brunello di Montalcino style we know today did not emerge until the 1870s, just after Il Risorgimento (the unification of the Italian regions into a single state). Its evolution was due in no small part to the efforts of Ferruccio Biondi-Santi, whose name lives on in one of Montalcino’s finest Brunello-producing estates.

A soldier in Garibaldi’s army, Biondi-Santi returned home from the Garibaldi campaigns to manage the Fattoria del Greppo estate belonging to his grandfather Clemente Santi. It was here that he developed some novel winemaking techniques which would revolutionize wine styles not only in Montalcino, but in much of Tuscany as well. 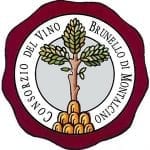 Traditional Brunello di Montalcino winemaking methods involve aging the wine for a long time in large oak vats, which results in particularly complex wines, although some consider this style too tannic and dry. Modernists set the ball rolling for a ‘fruitier’ style in the 1980s, when they began to shorten the barrel-maturation time and use smaller barrels (59 gallon/225L French oak barrels).

According to the disciplinare di produzione (a legal document laying out wine production laws) for Brunello di Montalcino, Brunello must be made from 100% Sangiovese and aged for at least four years (five for riserva wines). Two of these years must be spent in oak, and the wine must be bottled at least four months prior to commercial release. The elegant, age-worthy wine which results from these strict laws is known for its brilliant garnet hue and its bouquet of berries with underlying vanilla and spice. A hint of earthiness brings balance to the finest examples.