The Manoir de Chaix in France’s Loire Valley is more than just a place to sleep. It is altogether a bed and breakfast, a historical landmark, and a home ready to make you a part of the family. This chambre d’hôtes has its own unique story, as discovered by Olde Ipswich Tours owner Jean Moss on her very first research visit to the Loire Valley back in 1994.

With a dream to make a living bringing small groups to tour some fascinating regions of the world, Moss began her journey at the Manoir de Chaix, thanks to a personal recommendation from Lionel at the Gîtes de France, a prestigious organization listing small, family run accommodations in France based on high standards of quality and character. 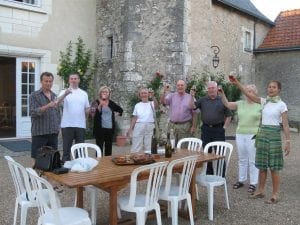 Moss, along with husband John and 3-year-old daughter Nicole, spent a week at the Manoir de Chaix in March of 1994 with owner, Suzanne Fillon, her son, Francis, daughter, Dominique, son-in-law, Pascal, and Dominique and Pascal’s four small children, all around Nicole’s age.

The two families found they had much in common and quickly became friends. The Mosses embraced the French philosophy of la joie de vivre, the “joy of living”. They were fed from Suzanne’s garden, shared bottle after bottle of wine from the manor’s own wine cellar, went shopping in the market for fresh ingredients, and kept their bellies full with the Fillons’ delicious home cooked meals.

One evening during that first visit, while Dominique and her mother prepared dinner for the gîte’s guests in thekitchen, Pascal took John and Jean underground to the Manoir’s ancient wine cellar, a small cave accessible by climbing down a staircase hidden in the jardin, dimly lit by the glow of a bare light bulb dangling from the cave ceiling. Pascal showed John and Jean the family’s personal wine collection, arranged shelf by shelf around the cave walls. In his beautiful Loire Valley French, he invited them to taste several different local wines. 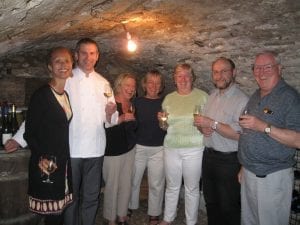 Stories were shared, laughter and many toasts were made, and by the time Dominique called down that dinner was ready, a miracle had occurred. French-speaking Pascal and strictly English-speaking John discovered that they could understand each other perfectly! This is an amazing quality of the fine Loire Valley wines!

The Fillon family told the Mosses what they knew of the history of the Manoir de Chaix. Built in the 16th century by a wealthy land owner, the château was grand, with hundreds of hectares of farmland surrounding the main buildings. A few yards from the main house is a pretty cottage where the innkeepers live. This building was formerly the bread oven which once produced enough to feed all who occupied and worked on the large estate. Standing amidst Suzanne’s beautiful flower gardens is the ruin of an ancient keep—or dongon (dungeon). The keep is one of four original towers connected by walls surrounding the Renaissance-period château. There is also a 500-year-old barn on the property, and several out buildings, now used as rental cottages. The family continues to increase their knowledge of the history of their property to this day.

This first visit to the Manoir de Chaix in 1994 gave birth to Olde Ipswich Tours. The Mosses returned to the Manoir year after year, bringing small groups of Americans to Paris, the Loire Valley, and Champagne, to experience the beauty, history, outstanding food and wine, and the joys of getting to know a delightful French family.

With time came many changes. Nicole and the four little boys grew up. Dominique and Pascal have left the Loire Valley for the warmer Mediterranean climate of Corsica, and Dominique’s brother Francis has taken over managing the gîte with a new manager and close friend, Christian Poil. Former sommelier for the famous Parisian chef, Alain Ducasse, Christian and his partner Linda today help Francis and Suzanne maintain the historic manor house while entertaining guests from all over the world.

Guests on Olde Ipswich Tours’ Loire Valley Culinary Tour, or Paris, the Loire Valley & Champagne, will be both charmed and delighted to learn about the history of the Manoir de Chaix over local wines and hors d’oeuvres with Christian and Francis, and fun French cooking classes with Linda. They will dine with other travelers and likely expand their worldview.

If you get the chance to stay at the Manoir de Chaix this year, you will share in the excitement of a new historic project. The beautiful little keep in the backyard, beyond the swimming pool and the picnic table, is being reconstructed. This square tower (la tour carrée) will one day look as it did five hundred years ago, when the château was in its glory. You can follow its progress on the family’s blog: http://manoirdechaix.wordpress.com.

To visit the Manoir de Chaix along side Olde Ipswich Tours visit www.ipswichtours.com.